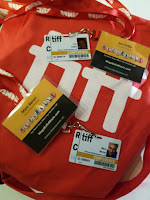 Toronto is a great city: good transportation, very clean and people are friendly. It feels like Manhattan with a European flair. The festival is centered downtown in the Entertainment District and almost everything is in walking distance. For those who cannot find accommodations nearby find one near the underground or trolley lines, which are very efficient.

We were able to put together the travel and hotel with loyalty points keeping the trip very affordable.  We used the new UP Express, a train which connects Pearson Airport to Union Station. $12 Canadian gets you there in 25 relaxing minutes. Our hotel, the Delta, was in walking distance of Union Station and boasted amazing views. We kept our food costs low by having large breakfasts at the hotel (included in our deal), and by taking advantage of the VIP lounge in the evenings, which offered a variety of food and drink (also included).

We attended TIFF to get the experience of a major festival. I’ve heard it said, and found it to be true, that it’s a good idea to attend a major festival BEFORE you have a film entered. It’ll be a great learning experience to see how the festival runs, and how the industry works within the fest. Our new lawyer thought it would be good to join him and others who were attending, and to sit in on a panel.

TIFF is the largest festival in North America, and with 350 films screened in ten days it’s too large. Considering every day there are multiple premiers, screenings, panels, discussion, events and parties one cannot not physically make them all. There were several films I had hoped to see including The Bleeder (which a friend acted in) and EgonSchiele: Tod und Madchen. My grandfather schooled with Schiele at the Vienna Academy of Fine Arts. I'll definitely see both films when they open in NY.

I had written to a few friends who I knew were attending. At last minute one told me he had 1 extra ticket for The Bleeder but we had set other plans that day and time. The lines waiting for rush tickets were very long to almost every film, and those with the most buzz were impossible to get into. We focused on the panels, discussions and networking moments to learn as much as we could. Our intent was to learn all we could, network where possible, and to use TIFF as the jumping point of the reboot of our film, MegaBall$.

We were armed with some great looking one-sheets; heavy magazine glossy sheets with our poster on one side (designed by our production designer, Roger Ambrose) and details about the project on the other. We handed out where ever we could, but wished we totally depleted our supply before leaving. The response from those we talked with was very positive. They liked the concept, the 1-sheet, and one person stated our log line was the best he’s ever read.

We were invited to one party hosted by the South African Film Office, but we opted to attend one jointly hosted by SAG-AFTRA and ACTRA. I felt as a board member of SAG-AFTRA I was better suited to meet and greet fellow members and union leaders. Overall a nice event and a need break from promoting our film’s development.

The big lesson we learned a little too late. Don’t expect to randomly meet some person in a festival that will have time to talk about the project you’re developing. Sure, there are many filmmakers willing to talk – and we were happy to do that. But the industry people you want, the financiers, distributors and sales reps are so busy doing business there’s not much time to meet. Their schedule doesn’t allow them to just grab a wine and mingle at some panel. The trick is: once you’ve purchased your industry pass, most festivals release a list of all the industry people attending. You must go down that list and reach out to preset meetings. The further in advance of the festival the better. We were able to secure one meeting in advance, that was a little harried because it started late, and we needed to catch the UP train back to our flight home. 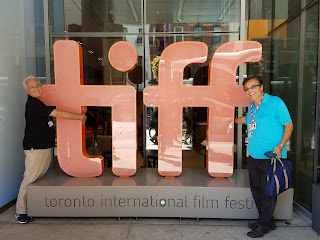 Our lawyer, Corky Kessler,  had asked us to sit on one of several livestreamed panels about film that coincided with the festival which was featured on Torontoeco.tv. In addition to the development panel we spoke on, we stayed off camera to listen to all the other panels. This was a good move for heard some good advice, met a lot of good people -- all colleagues of our lawyer and who took our project seriously. According to the technician the streamed panels had 150,000 views worldwide.

We enjoyed a little down time as well, to pace ourselves and enjoy the city. I wouldn’t mind returning for a few days to play tourist in the early fall.

The overall lesson – plan far ahead when attending a festival. Try to make appointments to meet industry people long before you get there. Dress comfortable, specially shoes, and be armed with a good 1-sheet and lots of business cards, and pens and a notepad. Make sure your 1-sheet (or business cards) have whitespace where people can make notes.