We just returned from a Florida trip where we met with our team members, Elizabeth Wentworth and Ellen Jacoby. Elizabeth was the Broward County/Fort Lauderdale Film Commissioner for over twenty years, and Ellen is a casting director who just celebrated her business' 25th anniversary. Ellen's work includes USA TV's Burn Notice and the soon-to-be-released Tom Cruise film, Rock of Ages. Both Ellen and Elizabeth did a video commentary about MegaBall$ which we'll post on our film's website in the next few days..

Ellen is going to give a copy of the MegaBall$ screenplay to her friend Sharon Gless, who is known for her TV show Cagney and Lacey, and now co-stars on Burn Notice...in hopes that Sharon will be interested in playing a featured role in MegaBall$.

We then visited the Dezer Car Collection, managed by my friend Doug Redinus. It was our second visit to the collection, which boasts over 950 vehicles purchased/owned by Micheal Dezer, and among them are many that were featured in movies and television. The day of our visit there was a commercial shooting using the BatMobile from the Warner Brother's Batman film featuring Michael Keaton; watching over the work was a BatMobile from the TV show that starred Adam West. We were able to shoot some video that we'll include in our next MegaBall$ teaser. 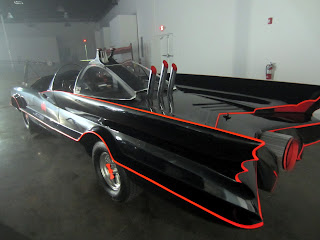 Above - the original TV batmobile, one of two in the collection 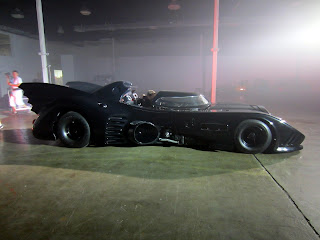 The Warner Bros./Michael Keaton Batmobile - one of several in the collection.
Posted by Unknown at 11:23 AM 0 comments