I thought I'd recap my recent 9-day visit to the 2016 GI Film Festival (GIFF) in Washington, DC...their 10th year! (See the festival schedule here.)....my third time and, along with two others from SAG-AGFTRA, was a guest judge,

As part of a team from SAG-AFTRA -- a sponsor of the GIFF -- our bi-partisan committee, the Military Personnel and Family Support Committee, supported and attended the GIFF for the third year in a row. Among our group of actor-members are also veterans, including the committee Chair Rik Deskin (Air Force, president of the Seattle local), Vice-Chair Gene DeFrancis (Navy, of the New York local) and Marc Baron (Navy, NY Local Board), National SAG-AFTRA President Gabriel Carteris, National Secy/Treasurer Jane Austin, Susan Snyder (national board member from the Washington-Mid Atlantic local), Lance Lewman (president Washington-Mid Atlantic Local), Gale Nemec, Pamela Greenwalt (SAG-AFTRA Chief Communications and Marketing Officer), Kerri Wood (Legislative and Policy Matters Staff, and committee liaison), and SAG-AFTRA lobbyist, Todd Flournoy.
To be clear, the sole purpose of our visit is not to watch movies. We mingle with the filmmakers and promote the use of SAG-AFTRA members by explaining our various independent film contracts, we support the improvement of how veterans are portrayed in the media, we chat with many union members who attend the festival...and we talk with many local and national elected officials....and we visited the Walter Reed Hospital to chat with many outpatient recovering Vets.

Some of officials attend the events, such as the VIP-only 10th Annual Congressional Reception Cannon Office Building (along with special guest, actor J. W. Cortes), or the evening of international films screened at the Canadian Consulate, and others are met in private quarters. Then there's the 'gauntlet'.  That's they day when Todd has scheduled numerous meetings in Capitol Hill that has us running - literally - from office to office and building to building. We discuss areas of concern to our members and our union's legislative efforts, such as film tax incentives and the Fair Play/Fair Pay Act ...and offer our support for veteran affairs.

Among the gauntlet meetings this year were Congressmen Tim Walz , Mike Bost, Marsha Blackburn and Ted Lieu, the Assistant Secretary of VETS, Mike Michaud,  and all of their assistants and advisors. It's quite an experience navigating the hallways of the Cannon House Office, Longworth House Office and Rayburn Office buildings. We met with Derrick Dockery, the former NFL football player who is now with the Office of the Speaker, located in the Capitol Building, who took us out to balcony for photos. 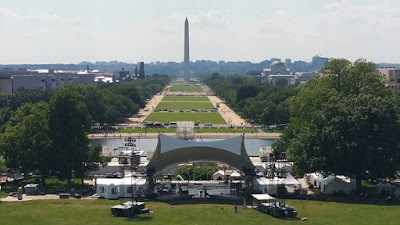 Then there were the film, 78 in total - many made by veterans, all about the experiences of veterans and uniform service. Some were outstanding! My favorite two were documentaries on another perspective of World War II titled On the Wrong Side, and The Unimaginable Journey of Peter Ertel, which won a major festival award.

In addition, we were treated to special screenings of Top Gun, X-Men: Apocalypse, The Finest Hours (courtesy of Disney, presented by Jonathan Flora) and 13 Hours (about the Benghazi attacks). Following 13 Hours there was a Q&A with one fo the films actors, Dominic Fumusa, and three of the real "Secret soldiers" Kris 'Tonto' Paronto, John 'Tig' Tiegen and Tyrone Woods. Their story is an epic one, and was a fitting ending of the festival leading us to Memorial Day.
I also managed to get a few hours of my 9 days there and visit Washington museums and monuments....and now it's back to work and putting together my comedy feature, MegaBall$.

Overall, a fantastic trip. Good films, making new friends and connecting to filmmakers, glad-handing politicians, all while representing our union and fellow members with a fabulous team of dedicated union members.
Posted by Unknown at 12:03 PM